A couple of years ago I picked up the excellent Programming Rust book.

Reading how the Rust compiler enforces memory safety and avoids data-races reminded me of the AHA! moment, when I learned how Node.js makes concurrency accessible to JavaScript developers, without the synchronization headaches of multi-threaded servers.

But there's more. Rust programs have a very minimal runtime - no garbage collector or class loader. This makes Rust ideal for constrained environments like embedded systems or edge compute platforms - so watch this space.

This article covers the experience of buiding my first Rust crate.

The shortscale-rs library tries to replicate shortscale, a small JavaScript module with just one function which converts numbers to English words.

The Rust ecosystem has produced an absolutely awesome array of tools and documentation.

I followed the recommendations of Jason Williams to install Rust Analyzer for VS Code instead of the default Rust extension. You'll also need CodeLLDB for debugging. 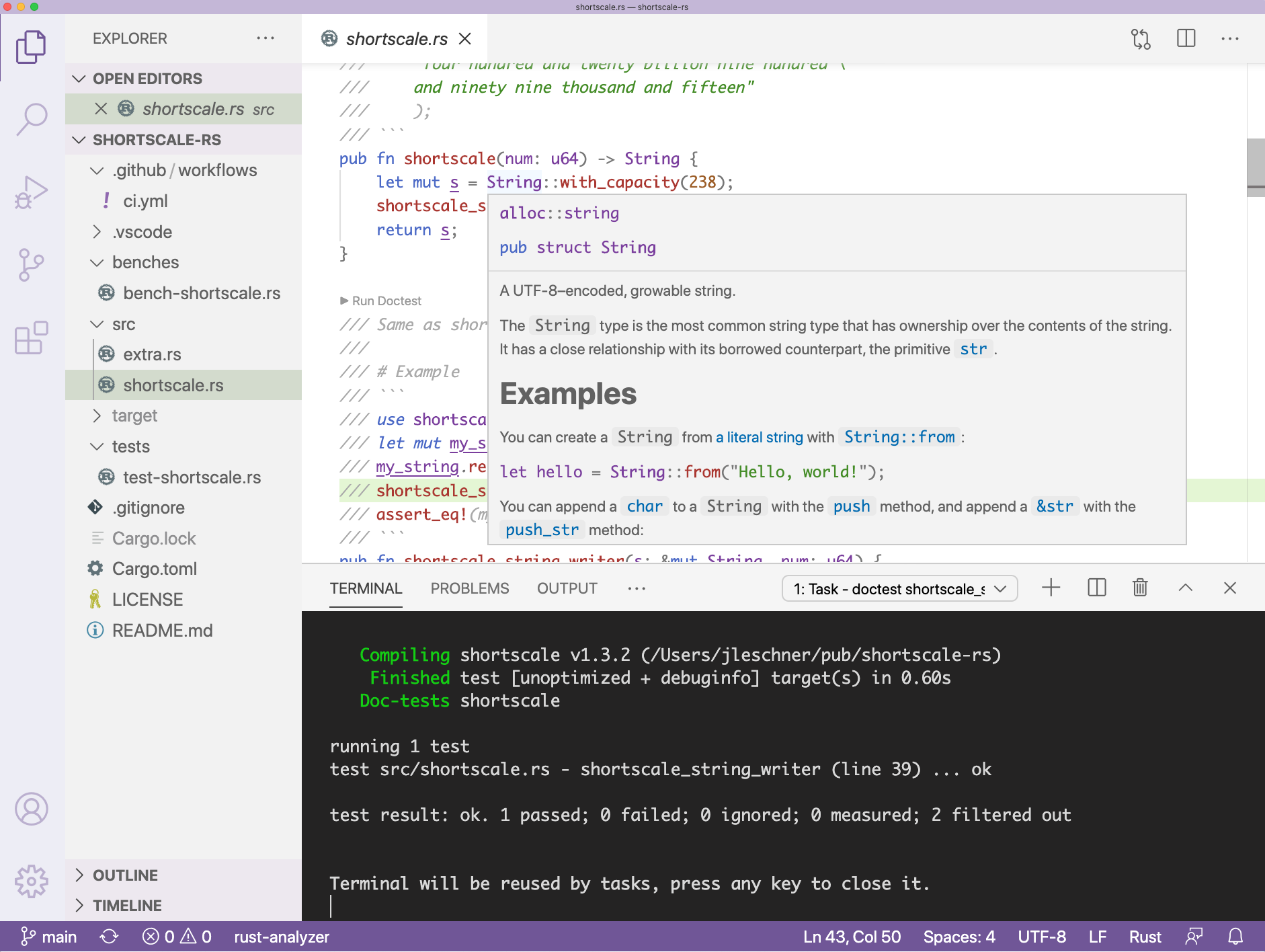 I particularly like the ability to run doctests directly in the VS Code terminal.

In JavaScript building strings is straightforward. Simply use + to concatenate any string to any other string. Empty strings being falsy helps to write very compact logic.

The example below from shortscale.js behaves like the built-in Array.join, except that it avoids repeating separators by ignoring empty strings.

Here's my first attempt to do something similar in Rust.

'Why Strvec?', you might ask. In Rust, the primitive string type, used for string literals, is a str. My first thought was that shortscale-rs should manipulate collections of str's. So, instead of using String concatenation, I put str's into Vec's.

Notice the elegant match syntax - one of my favorite Rust language features. The compiler ensures that the 'arms' of the match cover all possible inputs. The result is both readable and concise. The '_' is shorthand for any value.

Performance does not matter,
until it absolutely does.
@matteocollina

The measured performance was, well, an eye-opener! ~4459ns per shortscale_vec_concat call in Rust, compared to ~1342ns for the equivalent in Node.js.

The next thing I tried was to replace the Vec collections with simple Strings, creating and returning those from each function in the Rust program. This is shortscale_string_join. You should see from the benchmark, that its performance was even worse. Clearly I was doing something wrong.

Fast forward to the current implementation, which mutates a pre-allocated String rather than calling functions which create and return new Strings.

The result is significantly faster than JavaScript.

I still have a lot to learn, but this exercise was a great way to start building an intuition for Rust development and the performance of Rust primitives.